Deepening engagement with the journalism tech community, as a Fellow 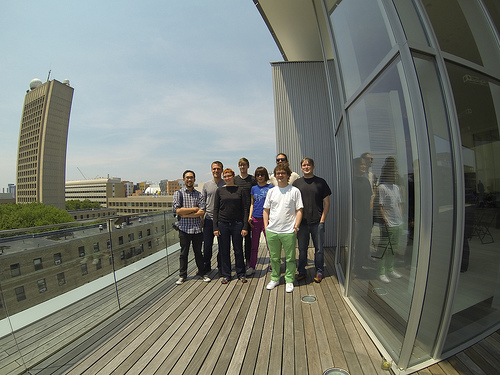 This year the eight Knight-Mozilla Fellows are roughly half folks who were not previously involved with journalism development and half people who have deepened their engagement with this community via the Fellowship. Last week, we heard from the first group, Fellows who took varied paths to their news organizations. This week we learned what it's like for people who have worked in newsrooms to experience those spaces as a Knight-Mozilla Fellow.

What do you mean, I get to do whatever I want? Stijn Debrouwere began the week by expressing his awe at the very premise of the Fellowship and the space it allows for exploration.

"Energy is good, though. Here’s how an OpenNews fellowship like mine works: work on whatever with whoever, learn anything, and talk about it wherever. It’s the sweetest gig ever invented, but it’s also a bit of a brain melt. When the 2013 fellows got started the most commonly asked question was “So I get to do whatever I want? WHAT DOES THAT EVEN MEAN?” (First world problems, tell me about them.)

So what have I been doing these past few months as a fellow? For starters, all sorts of funky little side projects. I’ve written a tool do do literate programming in Python, wrote my own blogging engine, spent a week researching how reproducible research can help journalism. Learned about design thinking from IDEO and about programmable media from Mark Boas."

On Fellowship: Mike Tigas meditated on the role of the group of Fellows in his experience of the Fellowship, which differed from the years he spent as a news dev at a small newspaper.

"A lot of the best parts of the fellowship are about inspiration and turning that inspiration into something great. We fellows inspire one another, we inspire other people, and we in turn, are inspired by a lot of the people we get a chance to interact with through the course of our fellowship work."

Why Civic Hackers Should Hang Out in a Newsroom: Friedrich Lindenberg described the overlap between the civic hacking and journalism worlds, which is a growing community that the Fellows got to really connect with at the Knight-MIT Civic Media Conference in June. But as Friedrich tells it, the real action is in a newsroom:

"Five months into my fellowship, I'm certain that the best place to learn how to engineer great civic applications is in a newsroom. Working to create narratives that feed into a news cycle, address a wide audience and tell a clear story is an amazing challenge for any technologist. Being involved in journalistic projects as a fellow puts you in the center of a three-way interaction between reporters, the data at the core of your story and the technologies used in its presentation."

Annabel Church also joined the Fellowship after working in news development and heard about it from her colleague at the Guardian, 2012 Knight-Mozilla Fellow Nicola Hughes. Looking back now, Nicola explains how being a developer journalist has shaped her current work:

"Even though I can no longer do whatever I want I still have immensely more creative freedom and self-governance than anyone else with ‘journalist’ in their job title. Because I am self-taught, because I don’t need any instruments in a news organisation to produce everything they can, because I hunt for ideas on GitHub and Source and from DataMiners; I cannot be managed. And the digital team at the Times Newspaper Limited are ok with that.

I see myself as a disruptive force and have been told to “keep on doing that”. I am working with a young, creative and determined team. We have huge challenges ahead of us and that makes us a team. We are a motley crew with the most diverse skills ever seen at News Corp. So my time as a fellow has carried on in spirit. You can’t undo a realisation. So I will always go where I can code stories."

2012 Fellows Dan Schultz and Laurian Gridinoc also shared their perspectives on the Fellowship. For Laurian, looking back nearly a year later, the tl;dr is:

"I had an awesome year being an Knight-Mozilla Fellow, I worked with the amazing BBC News Specials team, went to all the relevant conferences and hackathons in US and Europe, learned a lot, made amazing friends. In the end helped me find out where I wanted to be."

And Dan, hyperbolic as ever, detailed his many identities as a Knight-Mozilla Fellowship alumnus and concluded:

"By the time you complete your fellowship you will be an unstoppable force of raw digital power. You will be oxymoronically established as both an outsider and an insider (so your perspective is priceless), and you will have had 10 months to show off what you can do. Following your passion at that point is as easy as breathing, unless you're a fish.

If your dream is a startup, you will come out of this with mentors, collaborators, and understanding. If you want to teach, you have an impressive set of experiences to show off. If you want a full time job, my other fellows have shown that you can absolutely do that too."

News developers get to do amazing work. Knight-Mozilla Fellows get to experience the excitement of newsroom development, but as Mike described, the Fellowship is an opportunity to connect with a community beyond the day to day. To build relationships with a community of Fellows. To hack with civic hackers inside newsrooms and at events like the Knight-MIT Civic Media Conference. To spend the time necessary to really think and plan and analyze some of the big questions in journalism right now. To get to spend 10 months crafting your answer to whatever you want to do to contribute to this group and to the help us all better understand our world.

It's an incredible opportunity and we're looking for five more people to join this Fellowship community in 2014. The application is due August 17. Apply today.