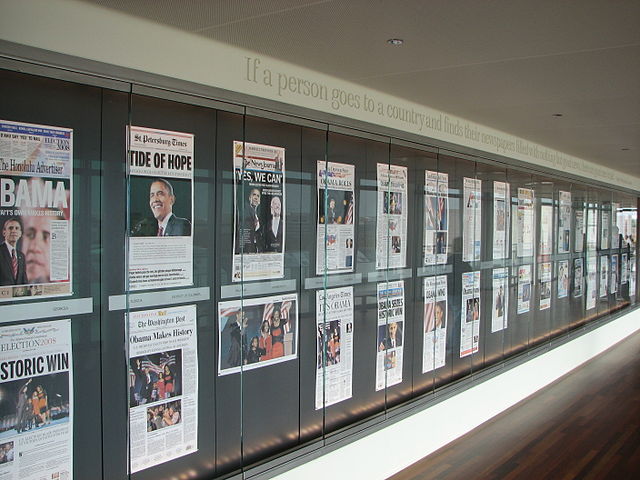 Sometimes I look around the room at a conference and am just awed by the intelligence and energy and generosity of everyone in the room. The annual NICAR conference, to me, is one of the embodiments of what is possible when you get smart people together to actually learn, teach, and talk with one another. Though NICAR is not focused on the news nerds community exclusively, it is one of the few events that brings a huge chunk of that group together in person. We learn and mentor one another, but don't necessarily get a lot of time to build, to do hands-on work with those colleagues at other newsrooms.

So this year, OpenNews is teaming up with the Pop Up Archive and Newseum to host a designathon the Sunday of NICAR. We'll take a brief roadtrip from Baltimore to DC to work together at the Newseum on the topic of archiving news apps. The idea was sparked by Jacob Harris and a discussion he ran at Newsfoo. On Source, Jacob laid out the archiving conundrum facing data journalists:

"Narrative journalists rarely think about this infrastructure. It’s just there for everything they write, because everything they write goes through the CMS and there are strong archival and financial reasons to syndicate, index and archive that content for posterity. But, then there’s us data journalists. Remember, we decided to pitch our tents outside the CMS so we can build exciting and new types of interactive website experiences. Which often means that our work is invisible in this greater world. It doesn’t show up in site search. It doesn’t show up in Google News. It isn’t rankable on the homepage. Our projects look like they belong to the website, but they are also fundamentally apart and often invisible when running. When they are mothballed, they can vanish almost completely."

On March 2, we'll spend the day working with news nerds and archivists, educators and journalists to get a better handle on what the scope of the archiving issue for news apps is and what are some tactics or tools we can use to deal with it. Later in March, a group will reconvene for two-days of hacking to build out the designs sketched out during NICAR.

Want to get involved?

As Jacob notes, there's a lot of people in other disciplines already working on archiving web content. With NICAR's proximity to DC and many of those institutions, we have an excellent opportunity to get heads-down and do some planning and sketching. Please, join us on March 2 at the Newseum.

And...if spending a couple of days chatting and building with super smart news nerds sounds of interest to you, just wait for the SRCCON announcement during NICAR.