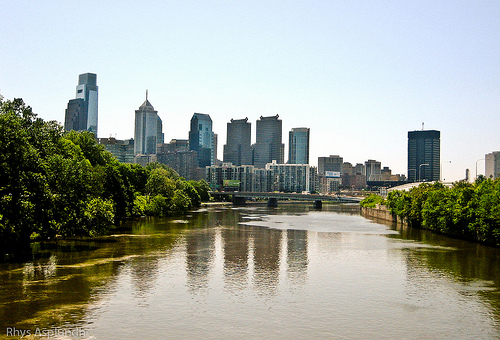 Journalists have a lot of high-minded ideals about journalism. We don't always live up to these ideals, but in Philadelphia, the William Penn Foundation decided to put some money behind the concept that journalism should be a public service. It created the Center for Public Interest Journalism and the Philadelphia Public Interest Information Network (now AxisPhilly). It put millions of dollars directly into public interest journalism, with a three-year runway to figure out what shape such an endeavor could take.

And yet it failed. Why? (And why am I attempting to answer this?*)

At the risk of burning bridges, I want to attempt an answer that helps push the public conversation forward, in the direction of revived public interest reporting in Philadelphia.

• Public interest journalism - This is not an inside baseball conversation. This is a conversation about nothing less than the fabric and integrity of public life. Don't scoff. That's what journalism at its "afflicting the comfortable" heights aims for, and that is what every incarnation of this project aspired to do.

In terms of William Penn's role, they have funded public interest journalism projects like the Notebook (my former employer) and PlanPhilly for years. It funded these projects not because of journalism specifically, but because of public service. But it's hard to keep carving out money for journalism from portfolios that are often focused on direct service. Plus, that approach did not allow all topics or types of news organizations to be funded.

So, as Chris Wink detailed, William Penn did some studying. It continued funding projects and experimented with things like the Philadelphia Enterprise Reporting Awards (an under-valued model that featured collaboration with a big-tent array of organizations doing journalism). It decided to create PPIIN and recruit a big-deal CEO.

Everyone held their breath. What would PPIIN look like? Would it be another competitor for foundation funding in an already stressed landscape? It turned out it would become an apparition.

So now, public interest reporting continues to atrophy. The appalling spectacle of the dailies continues. Where's some of the best reporting happening that attempts to hold power to account and elucidate the extreme disparities in our city? At the City Paper. The dailies still give visibility to issues of poverty and inequity, but precious few reporters give context to the experiences and structural inequities facing people throughout Philadelphia. You know, the public. Whose interest journalism is supposed to serve.

It doesn't have to be that way. Many nonprofit, public interest journalism models exist to learn from, but the thing that unites them is a clear devotion to public service, which somehow got lost in AxisPhilly's evolution.

• Elephant in the room - Let's call out the elephant. It's no longer "gestating."

From what seemed like day one, Neil Budde referred to PPIIN by the adage about blind men and an elephant: everyone feels a different part and doesn't realize it's an elephant. It appears that how he chose to deal with that situation is by the magic trick of there actually being no elephant after all. He was hired to define, and sell, that elephant. But, to his last day he was unable to effectively do that. To be fair, it's not just him. He was hired after an exhaustive search. But, I've learned that if the best people available for a job don't take your offer, maybe there's something wrong with what you're offering. And the PPINN folks did reboot the CEO search once, but once clearly was not enough.

He left, with an understandably polite storyline of difficulty with fundraising. But the thing that no one seems to be interested in talking about is that to fundraise you need to know what your project is. You cannot fundraise for an elephant. Even a bad idea could have gotten more funding. No one wanted to see this effort fail. But hiring several people with an unclear mission does not a grant proposal make.

• Nowak was no savior - Well, if there was someone who wanted to see this fail, it probably was Jeremy Nowak. The funding for PPIIN was already issued before Nowak came on board and the strategic plan he helped craft had no space for journalism. Jason Fagone's profile of Nowak shows that he was no ally, but a man with his own plans. Dan Denvir's reporting on Nowak’s involvement in education shows that public interest was not part of his focus, and seriously calls into question how he would have handled continued funding of the Notebook or other journalism organizations that somehow managed to get funding under his tenure.

• The chance no one ever gets - This was a well-resourced, if bungled, attempt to support journalism for the public good. Not to eke out some funding from another line item. But to support and grow the ecosystem of journalism that serves, and reflects, all of the people of Philadelphia. The people of a city that is growing after decades of decline, largely fueled by immigration. Of a city where 40% of people do not have home internet access and as such, extremely limited access to an online-only news organization. Of a city with schools in neighborhoods that are often segregated and that don't receive enough money to open. A city with phenomenal journalists who want to do reporting that is a public service not a golden parachute into retirement.

So, let's talk about journalism in the public interest. We don't need years of reports to do this. We need the will. We have the expertise and gumption, and hey, maybe even a little leftover money.

I am interested in reporting this out in a more thorough fashion. Got tips, want to talk? Email me.

*Disclosure: I worked for five years at a nonprofit news organization, the Philadelphia Public School Notebook, that received the bulk of its funding from the William Penn Foundation. I was not contacted in the PPINN CEO search, but I watched it with interest as my experience and connections in the Philadelphia journalism community grew. I'm very interested in nonprofit, public interest journalism generally. And, given that I no longer work for a Philadelphia-based institution, I have a little more freedom than my friends and colleagues who may not feel comfortable speaking publicly about these issues.