"No more deportations, we shall not be moved" 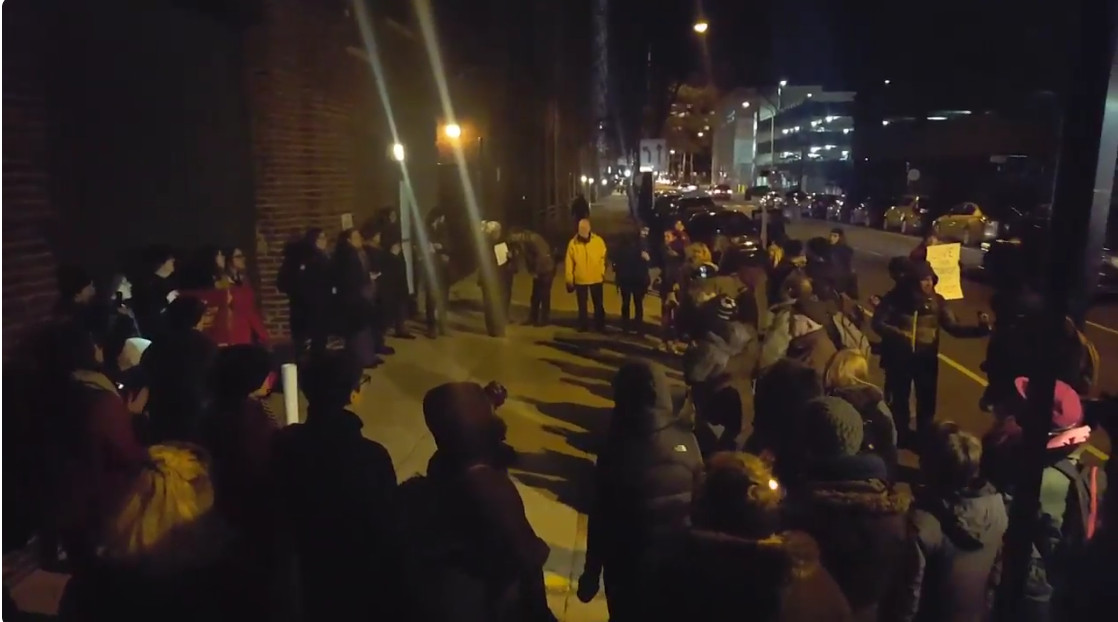 We wont stay quiet, we will fight for our brothers and sisters, we take risks because we know a better world is possible! #sanctuaryforall pic.twitter.com/gvJGjYdzzv

Today, on Valentine's Day, the Sanctuary in the Streets network in Philadelphia was activated for the first time. A person called a hotline run by New Sanctuary Movement and reported Immigration and Customs Enforcement was at their door. NSM staff said they could hear ICE pounding on the door in the background and demanding the door be opened while the person calmly explained what was happening. Then the line went silent.

NSM decided to go to the ICE processing office in downtown Philadelphia and contact hundreds of Philadelphians who had signed up and been trained to come together in a situation exactly like this. To come to a location at a moment's notice to gather and peacefully, prayerfully, positively disrupt an ICE raid.

I got the text as I was wrapping up my work day and it took me about half an hour to get there. When I arrived, a couple dozen people were already there singing. A person had been brought to the office just as NSM arrived, so there was no time to interrupt. But they still gathered to sing and pray--loudly so the people inside the unassuming building could hear. A little while later, a van left with several people, presumably bound for a detention center.

When I arrived, I thought things were just going to wind down and everyone would go home within a few minutes. It was NSM's first time trying out a instant response like this, and it all had happened so fast. But the organizers kept trying to get people to share and do chants. It took me a few minutes, but then I realized.

They had called the local news stations.

They were waiting for the journalists to arrive to film and broadcast the fact that dozens of Philadelphians came out on a cold night, a holiday no less, to interrupt an ICE raid. Even as the event didn't have as much drama as in other cities--or as much as we had prepared for in our training--it was still the first time this network had come together.

Two days ago, I gave a talk about networks and journalism. How journalists cannot remain apart from our communities. I talked about it in terms of my day-job network building work and then here I was, stomping and singing and living out what I had just shared in slide form.

Our communities are, and have been, under attack. Nonviolent resistance and community-made media continue to shape what we know and how we think about what is happening around us--pushing us to be more thoughtful, more inclusive, and at the same time, more assertive in creating the world we need. The world our Black, Brown, indigenous, Asian, immigrant, Muslim, disabled, working class, queer, joyful, resilient, creative, indefatigable country of resistors creates every day.

And old-fashioned journalism plays a role here. Especially broadcast with its bright lights and wide reach. Why did it matter that there were TV cameras there? (Coverage from NBC 10, Telemundo, philly.com)

Those news segments will:

I am privileged to be in a position to join an action like this and join a community of faith to support our neighbors and our city. Philly is privileged to have an organization like NSM, which is led by immigrants, to plan ways to support people at an uncertain time and use nonviolent resistance and mass media to shift our narratives about immigration overall. Journalists are privileged to have the trust placed in us to share these stories, share these resources, and ultimately help our communities stay better informed and better able to create the future they want and need.

No justice, no peace.