Hacks/Hackers Philadelphia participated in its first hackathon, with Random Hacks of Kindness, and learned that preparation and passionate team leaders can develop projects that continue beyond a fun, frenzied weekend.

Well before that December weekend, RHoK Philly organizer Michael Brennan reached out to Hacks/Hackers Philadelphia to see if we'd be interested in participating in the hackathon. At the November HHPHL meetup, Mike presented on RHoK and the group brainstormed some ideas. Two ideas gained traction in the discussion and had point people interested in building a team to work on the project. 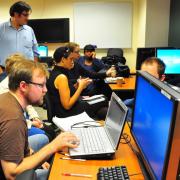 Bob Lannon (foreground of photo) brought the idea for audio detection on political ads to the meetup, and two weeks later came to the hackathon with a clear plan for developing the project, an open source tool for audio detection, a developer with mobile skills, and a lot of enthusiasm to lead a full team for the project. Team CuiBono (Bob, Pam Selle, Jake Richter, Jim Snavely, me) made progress on developing a demo version of the mobile app and gave a presentation that garned it the "Best Concept" award from the hackathon judges.

Faye Anderson (center) brought the issue of Voter ID laws and voting access to the group for discussion. A few ideas were discussed in the brainstorming session, and at the hackathon Faye, Dana Bauer, Donna Frisby Greenwood, John Campbell, Joe Tricarico, and Maneesha Sane fleshed out the problem definition and developed a map with information about how to gather the documents necessary to apply for a voter ID. By the end of the weekend, the group also created a Facebook page for The Cost of Freedom Project.

Often it can be hard to keep projects going once the excitement of the weekend fades, but the strong leadership and teams built during the hackathon have continued work with both of these projects. Team CuiBono has met and continues work on github with the goal of developing a demo soon to present to potential journalistic partners and funders. Faye maintains an active #costoffreedom presence on Facebook and Twitter and is working to make connections with other organizations to further develop the tool and continue spreading the word about voting access.

At the conclusion of the hackathon, Mike suggested a January 19 social follow up for teams. This will be a great time for teams to reconnect and figure out how to keep momentum going out of this hackathon, and into future civic, open data, and Random Hacks of Kindness hackathons. Already, RHoK "Best in Show" project Sheltr, which was pitched, planned, developed, and launched all within the space of the weekend, is winning awards and gaining attention. Sheltr shows that a small, committed group with the right skills and resources can go from 0 to awesome in a single weekend, which is a typical vision of an ideal hack project.

For the Hacks/Hackers Philadelphia teams, the hackathon was an opportunity to show how, in the spirit of RHoK, developers and subject matter experts with a variety of skills and backgrounds could learn from each other, work on a project in the public good, and keep that process moving after the weekend.

It's nice to see it laid out just how much Hacks/Hackers contributed to RHoK!

Thanks! It's been great to

Thanks! It's been great to see the work continuing. Look forward to catching up with everyone on the 19th.

If some one wishes expert view concerning
blogging and site-building after that i advise him/her to
pay a visit this blog, Keep up the fastidious job.