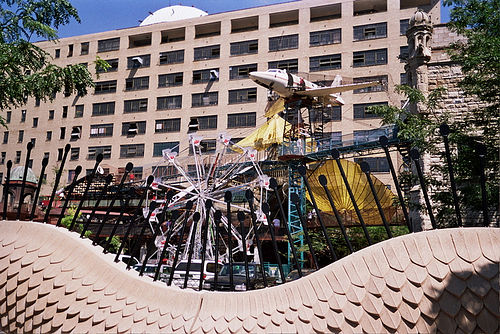 An exclamation of glee appeared on the #nicar12 Twitter stream last night. Thanks to Derek Willis (no, really, thank you!) dozens of journalists from the National Institute for Computer-Assisted Reporting 2012 conference descended on the City Museum in St. Louis.

Today, I tried to figure out how to explain what made last night so friggin incredible. First, the museum is amazing. It's pure fun. I realized that the museum also echoes many of the things that can happen in amazing newsrooms.

The conference offered days of learning, networking, lobby singing, and tutorials, which generated many new ideas and connections. The curious layout of the museum inspired conversations with people I hadn't chatted with, or hadn't chatted with enough. I also had the chance to explore on my own, think, and marvel at the people and the space. It was a space that was both comfortable and challenging, and it allowed me to shift easily between collaborating and catching up and meandering alone. The best workplaces are set up in a similar way that supports both collaboration and solo work. 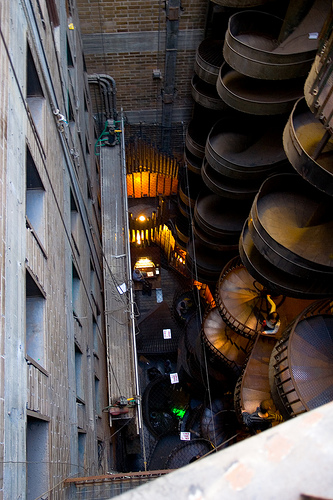 A community of people of all ages and backgrounds traversed the museum. Awkward teens with their parents and with friends. Whole families. Yuppies on dates. A bachelorette party. There was also some pretty literal community engagement--complete with balls getting thrown at a reporter. People were working together to problem solve: How does an adult move through a giant slinky? How does a family move a giant hamster wheel? Just how dizzy will a 10-story slide make you?

It was just a darn good time.

And, really, journalism is also joyous.

Crafting the perfect lede or slaying an infuriating bug can inspire joy. Last night, I saw and experienced joy and fun to a degree that I just do not encounter in daily life. But that fun does not have to be limited to a building in St. Louis. I want to transfer bits of the euphoria to my work.

The museum was created from found objects from throughout the city and they came together to create a space nostalgic, futuristic, current, and seemingly unconnected from time.

In journalism, there are similar chances to blend the new and old. That was one of the best parts of the NICAR conference overall. NICAR has been around for decades and presents excellent trainings on investigative and data journalism skills that will always be relevant. But, the conference was also a place for developers and programmers who are helping to usher in "the future of journalism." NICAR 2012 was a great example what becomes possible when you bring together smart people with differing skill sets and a ton of enthusiasm.

In both the case of a stellar museum and a stellar newsroom, people are what make an experience great. Connecting. Trusting. Laughing. Learning. Engaging with each other. My favorite part of the night was watching little kids crawl in crevices throughout the museum. They somehow contorted themselves through spaces I didn't even notice existed. Awesome journalists also find their way through hidden spaces in data and code and documents, in order to craft a story that connects with and informs readers. And that work can, and should be, friggin fun.

City Museum is my new reality check--connect, collaborate, explore, and have fun.

Photo 2: william.n
The view from the top of the long winding staircases to get to the 10-story slide.