Celebrating investment in OpenNews and the journalism code community 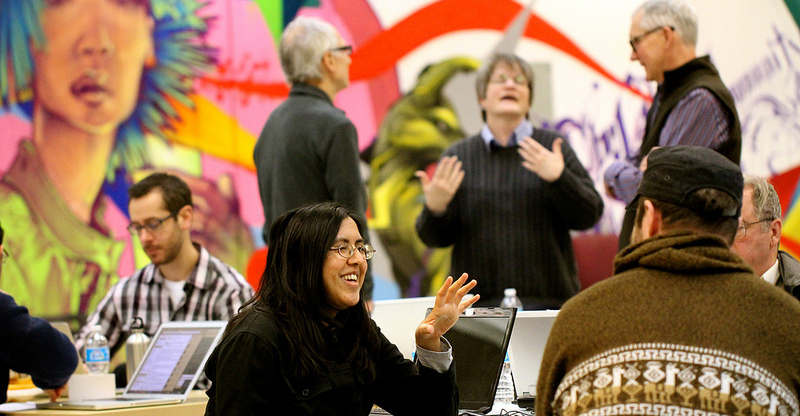 Today the Knight Foundation announced its renewed commitment to Knight-Mozilla OpenNews, with a $4 million grant. That's a whole lotta money. Big news. It's an investment not in a product, but in a community.

Earlier this year, the CEO of the Knight Foundation publicly asked for feedback about the Knight News Challenge and how to help their grantmaking have more impact. If I may be so bold: this is it. OpenNews has plans to build some amazing stuff, but more than that, this project is about acting as the connective tissue in the journalism code community. It exists to meet people where they are already at and support them in deepening their engagement, their skills, and their leadership in this community. It's rare that an organization has the chance to focus on building connections between people, institutions, and projects. But that's how we get to spend the next three years.

Journalism isn't the only industry plagued by silos and duplicative work. During editorial board meetings with the Notebook, it came up time and time again that programs had been tried in schools only to be abruptly canceled, whether they showed positive results or not. A new administration would take over and the cycle would start again - test idea, kill idea, forget idea happened. It was just so clear that it shouldn't have to be that way. There should be some way for programs to be tracked, supported, given room to thrive or fail, and when they worked, be replicated.

It seemed so simple.

But in an environment of overworked staff and underfunded institutions (sound familiar?) it's hard to find the time to think beyond the day to day, nevermind to take a step back and plan, organize, and implement longer view plans. OpenNews has been given the resources it needs to play that eagle-eye role in the journalism code community. With the luxuries of time, money, skilled staff, and a highly engaged, international community, OpenNews has the opportunity to show what can happen when you invest in community, in building connections, in supporting the development of leaders.

I just gave a session at the Online News Association conference about journalism hack days, one of the areas of community support we'll be able to continue and expand with this grant. It was a chance to share some of the amazing examples of what hack days can create as well as the cultural change it can foster. Several people in the session were interested in planning hack days and were eager to learn more about how to build energy and interest in journalism hacking. We've already supported hack days all over the world, and I'm looking forward to helping even more people plan events in their local community that offer opportunities for creating connections and code that will ensure journalism thrives on the web.

I'm tremendously excited about the next three years. We're gonna do intensive evaluation into our work and share it back to the journalism community, and I hope, the nonprofit community more broadly as well. It's rare to get the chance to do something new, necessary, and that you know has the power to improve how we support vital civic institutions. I'm awed. I'm ready. Let's show what ground-up community support can do for journalism.